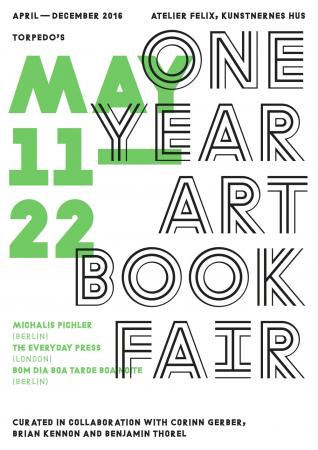 The OYABF is a unique project that extends Torpedo’s efforts to promote and distribute artists’ books and small-press publications. In a series of monthly events, artists and publishers are invited to display their books, posters, projects-in-process, artworks or other exhibition material which forms part of their production. The OYABF aims to emphasise specialization and individuality, and to create a situation in which visitors can explore a complete body of work in depth.

The selection of artists and publishing projects invited to OYABF have diverse strategies, interests and motivations. The art-book publisher can be an artist, a collective, a public art organisation, a small press, an art writer, an institution, a graphic designer, poet, critic or curator. Around 40 exhibitors have been invited and will be announced throughout the year. Each month’s curated exhibition will be activated by parallel events, talks, discussions and presentations.

While the butterfly could also serve as an auspicious symbol, its popularity was equally attributable to its appearance in one of the most famous parables in early Chinese thought: Zhuangzi’s dream of a butterfly. According to this parable, the legendary sage Zhuangzi dreams that he is a carefree yellow butterfly flitting about. Upon awakening, however, “he didn’t know if he was Zhuangzi who had dreamt he was a butterfly, or a butterfly dreaming he was Zhuangzi.” Chuang Tzu: Basic Writings , translated by Burton Watson, (New York, 1964).