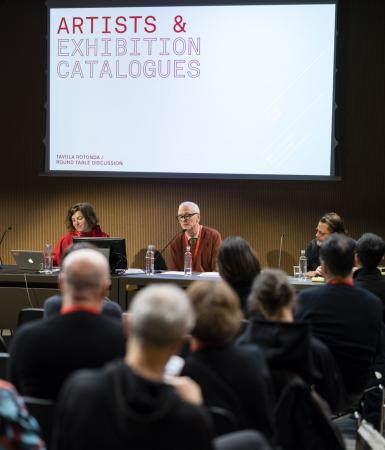 MAURIZIO NANNUCCI / THIS SENSE OF OPENNESS

presentation of the exhibition and launch of the book

with Maurizio Nannucci (Artist) in conversation with Pier Giovanni Castagnoli(Art historian) and Elena Volpato (Curator of Exhibitions at FLAT; Conservator and Curator at GAM – Civic Gallery of Modern and Contemporary Art, Torino)

On the occasion of the exhibition Maurizio Nannucci / This sense of openness, on view at La Centrale Nuvola Lavazza from 1 to 3 November, 2019, Maurizio Nannucci expands on his work in conversation with Pier Giovanni Castagnoli and the curator of the exhibition curator Elena Volpato. The exhibition brings together 150 works – editions, multiples and ephemera created by Nannucci between 1967 and 2019. They highlight the richness of his artistic practice, and the multiplicity of expressive means among which he has moved with extreme freedom in a continuous crossing of different mediums, combining art with his musical, literary and scientific interests.

The book revolves around an extraordinary and as of yet unpublished corpus of photographs of transgender people titled Gay: Incontro, Frammenti di vita, Momenti di vita comune (“Gay: Encounter, Fragments of Life, Moments of Life in Common”), taken by the self-taught Italian photographer Giordano Bonora in 1980 in Bologna and archived unnoticed for almost forty years in the Centro Studi e Archivio della Comunicazione (CSAC) in Parma. The idea behind Bonora’s images was unleashed by the decision of then-mayor Renato Zangheri to allow a small transgender and transvestite community to occupy one of the most representative public buildings in Bologna, Palazzo Re Enzo, in the center of the city. The book consists of all of Bonora’s photographs alongside a wide range of texts. The introduction is the Letter from a Trans Man to the Old Sexual Regime by the philosopher Paul B. Preciado. Inspired by Bonora’s photographs, the transgender activist, music producer, and writer Helena Velena provides a critical reflection on themes of freedom, sexuality, and corporeity and how their meaning has changed over time. Artist and editor Salvatore Vitale investigates how photographers impact on societies caught up in political and social tension. He examines their strategies of resistance and isolation, as well as forms of self-organization, regrouping, and dispersion through specific case studies. The curator and writer Wendy Vogel reflects on the relationship between separatism and trans identity, the subcultural codes adopted by subjects in the photographs and how their self-styling reads in the context of the feminist movement and post-1968 liberationist politics.
Lastly, Paolo Barbaro, Photo Archive Manager at CSAC, analyzes Bonora’s photos from T* together with two additional series (Il Pilastro and Istituto Gualandi) dedicated to marginalized communities of the city: the indigent residents of a poor outlying neighborhood and the deaf and old members of a Catholic institution in Bologna.

Announcement of the project winner of the Premio FLAT – Fondazione Arte CRT, selected among FLAT 2019 exhibitors’ proposals, produced thanks to the support of Fondazione per l’Arte Moderna e Contemporanea CRT.

A PORTRAIT OF THE ARTIST AS A BOOK

Abbott Miller has evolved a practice that merges design, art direction, writing, and curating in exhibitions and publications that explore art, architecture, performance, fashion and design. Before joining the New York office of Pentagram as a partner in 1999, he founded Design/Writing/Research, a multidisciplinary studio that pioneered the concept of the designer as author. Miller will reflect on the spatial and temporal qualities of books as a distinct mode of representation, one with a history rooted in visual books and modernist conceptions of the relationship between books and film. In projects with contemporary artists and architects such as Hans Haacke, Diller + Scofidio, Allora & Calzadilla, Matthew Barney, Yoko Ono, and William Kentridge, he has sought to make books that capture the sensory and conceptual intelligence of the work that is being documented. Miller sees design as a critical tool that not only organizes content but, also generates knowledge. According to Miller, “design thinking dissolves the lines between form and content, and between two and third dimensions”* (and this is true even more so for four-dimensions, i.e. time-based art). Expanding on the intentions of some of these projects, and the role of curators, designers, and publishers, Miller will show how it is possible to create an interpretive space that translates and transcribes the work from the space of the gallery or museum to the page.

Using paper and cardboard, Thomas Demand meticulously reconstructs for the camera lens scenes found in images from different sources. After photographing these models, Demand methodically destroys them to interrogate the limits of representation by complicating the relationship between reproduction and original. While this process is usually considered the subject and object of his artistic research, throughout his career, Demand has also challenged the performative qualities of the book, and particularly, the (exhibition) catalogue. Moreover, since 2007, Demand has ventured into curating, becoming the artifex of refined and insightful exhibitions and related publications. His work crosses different mediums and fields of artistic research. It is particularly interesting to analyze how this work is translated, expanded, reinterpreted, documented and systematized within the pages of the book. Discussing representative exhibitions and catalogues, this conversation will explore the features of Demand’s book production. This will afford a unique occasion to inquire about the artist’s attitude towards the book and the exhibition catalogue within his intermedia art practice.

Publishing Manifestos: An International Anthology From Artists and Writers (Berlin: Miss Read; Cambridge,MA/London: The MIT Press, 2019) features 75 key texts of critical engagement with publishing from protagonists of the field.

Independent publishing, art publishing, publishing as artistic practice, publishing counterculture, and zine, DIY and POD scenes have proliferated over the last two decades. So too have art book fairs, an increasingly important venue—or even medium—for art. According to Pichler, art publishing experienced a similar boom in the 1960s and 1970s in response to the linguistic turn in the humanities. Today, art publishing is confronted by the internet and the avalanche of texts and images it enables. The printed book offers artists both visibility and tangibility. In Publishing Manifestos, Michalis Pichler gathers texts by artists, authors, editors, publishers, designers, zinesters, and activists to explore this rapidly expanding terrain for art practice.

In his talk-cum-book presentation at FLAT Pichler will present the book focusing on themes of: alienation, “seriosity dummies,”* (how nice is to go for a) short walk through a historical arc of tension, (why) artist’s book is a problematic term, Materialzärtlichkeit (material tenderness, or, according to Pichler, “conscious orchestration and use of material, structural and social elements in the process of producing multiple books”*), as well as what he calls a “paradigmatic shift”* and (what one could call) the post-digital turn, plus (last but not least) art book fairs as public spheres.

This round table discussion investigates how some of the most interesting institutions that produce contemporary art exhibitions create catalogues that are neither mere exhibition documents nor means for promoting the institution of which they bear the seal, but are genuine instruments of knowledge made in collaboration with—or even by—the artists whose work they convey and which, in some cases, become artworks themselves.
Chiara Costa will focus on the Prada Foundation publications in whose production the protagonists of the exhibitions have been involved as well as publications that question the most suitable ways to document and translate artworks and their display from the third (or fourth ?!) dimension to the sequential pages of a book.
Herwig Kempinger, President of the Vienna Secession, will introduce how the oldest independent institution explicitly dedicated to contemporary art works on the publications that accompany its exhibitions. In fact, for some years the traditional exhibition catalogues have been replaced by artists’ books – volumes that, traveling from hand to hand, expand the range of action and the autonomy of art that the institution has defended since 1897.

The exhibition catalogue is a fundamental tool for curatorial research that does more than simply present and preserve outputs beyond the space-time dimension of an exhibition. This conversation aims to investigate the relevance of the exhibition catalogue through the insights of one of the most visionary protagonists of contemporary curatorial research. Carolyn Christov-Bakargiev will share her experiences and reflections around the exhibition catalogue as an instrument of knowledge, research, promotion and enhancement of artistic work – an instrument that more and more often, thanks to the vision and collaboration of artists, curators, graphic designers, institutions and publishers, becomes a performative document of multifaceted world-views (Weltanschauungen).Retracing her career, Christov-Bakargiev will linger on the characteristics and role of the publications that have accompanied some of the numerous exhibitions she has organized, including the notebooks 100 Notes / 100 Thoughts (2011/2012)for dOCUMENTA (13) (2012); the anthology in the form of a Baedeker guide (composed of texts commissioned from scholars as well as drawings by participating artists and texts selected by them) as well as the visitor’s guide (with titles and geographical location of artworks accompanied by tweets written by her) for the 15th Istanbul Biennial, Tuzulu Su / Saltwater: A Theory of Thought Forms (2015).