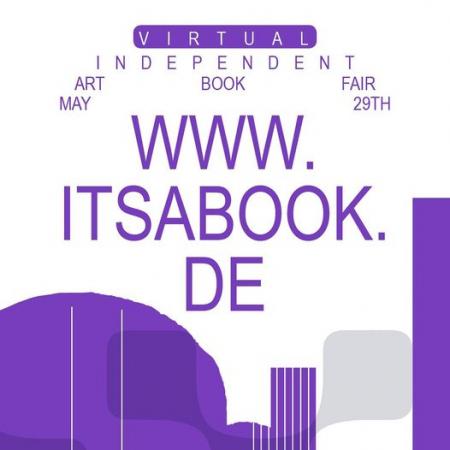 “it’s a book, …, the annual meeting of producers in the field of independent publishing, takes place for the twelfth time in 2021. for the eighth year in a row, it is developed as part of a project seminar at the academy of fine arts in leipzig. a group of students is conceiving, developing and preparing the event.

as we were in the final stages of preparing the last edition of the “it’s a book, …” in early march 2020, we were forced to cancel it due to the measures taken to contain the covid-19 pandemic. after all, the culture of independent publishing manifests itself especially through fairs and thus is currently facing difficult times. we were wondering in what form the “it’s a book, …” could take place this year. how can we create a place for the public under the current premises? how can we bundle the accumulated knowledge of the past symposia of the “it’s a book, …”? which networks can we activate to perceive the distances no longer as spatial obstacles, but—with temporal shifts—as a positive meeting?

beyond large gatherings of people that have become critical places, we are questioning and activating the digital space that has generally been activated in the cultural sphere the last year—in order to once again highlight the nature of the “it’s a book, …” as its real strength: as a place of encounter, as a marketplace for books and knowledge, and as a place for exchanging ideas and debates. for the first time we will host a purely digital event on a specially developed and designed website implemented in close collaboration with berlin design studio unfun. this new website will remain online permanently as a new and growing platform with a non-commercial marketplace and has been conceived in intensive exchange and with great commitment from the publishers.

this year’s fair is called “it’s a book, it’s a screen, it’s a space in between”: what does this digital space look like? how do we create spaces that visitors can enter and leave? how do we simulate the possibility of active participation, of exchange and physical presence not only virtually, but also implement it factually in the virtual space?

the website is our container for the “it’s a book, …” 2021: it is a digital, non-commercial marketplace, it is a showcase for publishers, designers and bookstores and it is an international platform for producers and their programs. we reframed the student competition, critically evolved from the discussions at the last “it’s a book, …”, which focused the evaluation of books. through unboxing videos we want to represent part of the tactile experience at book fairs that is clearly missing being a digital event. and we create the website as a space for our guests invited to the symposium; we are happy to welcome alexandru balgiu and olivier lebrun, leibnitz, lina ehrentraut, sophia prinz, yehwan song and hagen verleger among others for their lectures and performances respectively.

the symposium and other formats will be partly recorded beforehand, partly broadcast live from our studio at the hgb. altogether they will be transmitted to other parts of the world and they will be available in a media library later on. our studio is part of “broken relations – infrastruktur und unterbrechung kunst unter pandemischen bedingungen”, a project of the hgb gallery in cooperation with the academy of fine arts vienna. our setup extends the project into the atrium of the hgb that is usually welcoming visitors at the fair with many exhibiting publishers—as a reference to the place where the “it’s a book, …” took place the last years. certain aspects of the open and modular / reusable structure of the studio also connect with the design and the codes of the website.

for our thematic focus, we are looking at the philosopher paul b. preciado. his writings are the starting point for us to think about new forms of the public space. it is about understanding the change of the world not only through the restrictions we feel after the outbreak of the covid-19 pandemic, but to consider this moment embedded in conflicts and struggles that were already there before. “it’s a book, it’s a screen, it’s a space in between”: the space in between refers to the situation of transition the world is currently in. between book and screen, from a disciplinary society to a society of control, from a fixation on two genders to diversity, from power to participation."