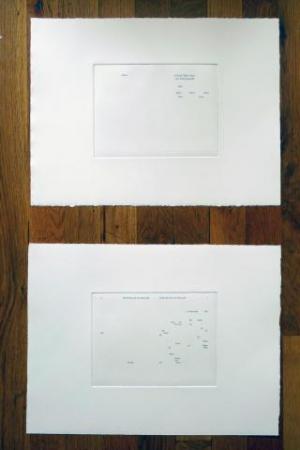 Conceived and curated by artist, teacher and founding editor of Information as Material, Dr Simon Morris, the exhibition will be the first of its kind in the UK, and will show works by a generation of artists who have sought a radical reconsideration of the relationship between literature and the visual arts.

Dworkin’s book collection of 2,427 titles, many of them pricelessly rare objects, are to be displayed on Invisible Bookshelves designed by Canadian architect Michael Farion. The exhibition will also include:

‘A Perverse Library’ builds on a legacy of residencies and exhibitions co-organised by Information as Material and held at Shandy Hall, the former home of the celebrated 18th-century English writer Laurence Sterne, now a museum dedicated to exploring his astounding and continuing contribution to the arts. “Through our exhibitions, and by hosting residency programmes, we are enabled to explore how contemporary artistic practice, whether text-based, visual, sonic or otherwise, can help visitors to the museum unlock the Trust’s collection of 18th and 19th-century literature”, says the museum’s curator, Patrick Wildgust. “Our aim is to encourage an inventive exploration of Sterne’s legacy and experimental spirit, in the context of the artefacts of his estate.”

Recent Shandy Hall exhibitions have included ‘The Black Page’ for which Wildgust commissioned 73 artists, including John Baldessari, Cornelia Parker and Rachel Whiteread, to re-produce the 73rd page of Sterne’s monumental novel The Life and Opinions of Tristram Shandy: Gentleman, in celebration of the 250th anniversary of the book’s publication.

The next residency will be held during August, when American poets Kim Rosenfield and Rob Fitterman will spend a week as poets-in-residence at the hall. The outcome of their visit will be featured in the ‘A Perverse Library’ exhibition.

Thanks to the generous support of York College, a free bus service will run from York train station to the Shandy Hall site on 27 and 28 October 2010. Places on the service can be booked today by visiting http://www.writingencounters.org. Places are limited so please book early to avoid disappointment.

‘A Perverse Library’ is co-organised by Information as Material, The Laurence Sterne Trust and In a word. The exhibition is made possible thanks to the generous support of Arts Council England through their Grants for the arts programme, The Henry Moore Foundation and York College.